I never knew housework could be quite so exhausting 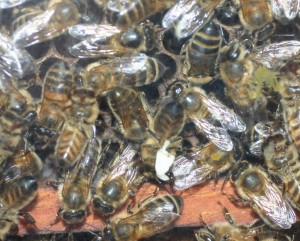 Bee with a mission

I’ve just been watching — or rather I’ve just given up watching — a house-cleaning bee attempting to remove a bit of larva from the hive.

She clearly doesn’t know the hive layout too well as she cannot find the exit. I’ve watched her run up and down the sides tightly clutching her debris. Tantalisingly, I’ve seen her walk straight over the top of the exit several times. No amount of willing her, enables her to find the way out. But she does seem to understand its around the edge of the colony somewhere.

Perhaps it’s because it’s the younger bees which do the cleaning and are not yet foragers have not mapped their home yet. (John B Free’s book The Social Organisation of Honey Bees gives a very interesting series of diagrams showing the ages at which bees perform certain tasks.)

However, she is determined to remove the trash from the hive, unlike some people I know who just drop litter anywhere.