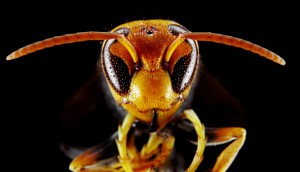 Oh dear, it looks like the UK newspaper headline writers are getting the Asian hornet threat out of proportion! Rest assured it’s really a threat to honeybee colonies rather than humans. But the headlines tell another story:

Is this the first sighting of a killer Asian Hornet in Plymouth? (the answer incidentally was no)

then some semblance of sense prevailed:

Twitter of course has gone way over the top confusing all sorts of hornets as the Asian hornet. As one Twitter user joked: “Okay, confirmed sighting of an Asian Hornet in Plymouth. I’m not going outside anymore. =)”.

Nonetheless, the Asian hornet may arrive soon in the UK and be a threat to honeybee colonies. Max Watkins of Vita explains the threat here and Vita’s hornet trap here.

Meantime, in conversation with a beekeeper in Greece this morning, I was told: “Ordinary hornets are bad enough here and it is common to lose 50% or more of the stocks. One reason for this is that the colonies become less strong in summer as it is hot, little forage and queen laying is low. The weakened colonies become more susceptible to hornet and was attack.”