Drone layer in the observation hive 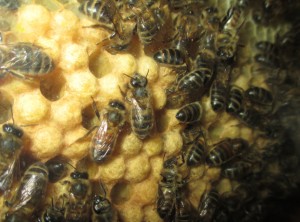 Drones being raised in what were originally worker cells

The queen in the observation hive does not appear to have mated properly and is laying only drones. I’ve never experienced having a pure drone-laying queen before, so that came as a surprise — and a disappointment. I wonder if an upbringing in an observation hive was a contributory factor.

The colony doesn’t seem to have a single worker egg from which it can attempt to make a queen — although a queen made from such a small workforce would be unlikely to be ‘fit for purpose’, as the current cliche would have it.

I will re-queen the colony as soon as the summer flow is over when I can spare a queen from one of the apiary colonies.