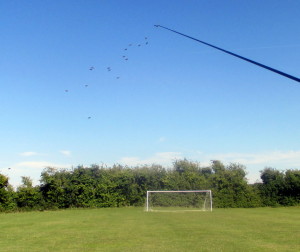 I bet the village footballers don’t know, but they play underneath a Drone Congregation Area, those secretive places that honeybee queens and drones meet to mate.

I had a hunch that the village recreation ground might be a suitable site, but was disappointed at first that no drones were chasing the queen lure on the end of the fishing rod.

But after a while, they arrived and wouldn’t leave.

I suspect that they lie in wait somewhere (in this case maybe the substitutes’ bench) waiting for a pheromone or other stimulus before raising themselves into action. It happens on almost every site — a short, but definite delay, before the drones leap into action.

So far I’ve located six Drone Congregation Areas — each about one or two kilometres apart. The mapping has begun, but I fear the drone season may be closing in.

The story so far: