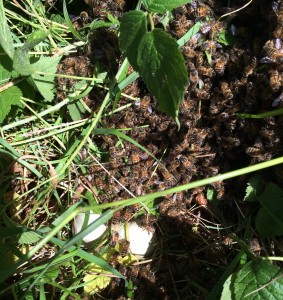 Swarm with flightless queen clustering around a clutch of pheasant eggs

After a two-week holiday, I arrived at one apiary over the weekend to find a cluster of bees on the long grass and brambles a few metres in front to one hive.

Since the queens were clipped, I suspected a swarm had emerged from one of the hives but was unable to fly without its queen.

But when I tried to find the queen to recover the swarm, I discovered that they had clustered around a clutch of pheasant eggs (it’s bird game country around here).

Perhaps the bees had grand ambitions to become birds — but surely that is underselling themselves?

I have no idea what became of the pheasant that was probably terrified out of its wits when the swarm descended. She hasn’t returned!

The swarm is now happy in its new hive although the queen proved very difficult to catch in the long grass and spiky bramble shoots.