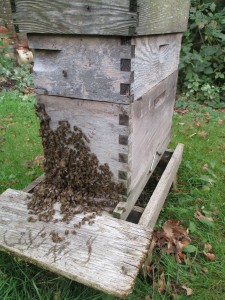 An unexpected cluster in October.

I think this is an invasion in progress. The observation hive in the office, a few metres away has turned into a drone-laying colony and some of the smarter bees must have realised there’s no future in it.

It seems that the observation hive is suddenly being abandoned and there’s a queue at the nuc.

I have not seen this before, but it’s probably quite a common occurrence and shows just how Varroa might  spread. If the colony being abandoned has a high level of Varroa infestation, guess what happens next!

Fortunately this colony is currently being treated for Varroa with Apistan, so it should be safe from invading mites.

Not directly related, but a recent paper showed that Varroa know how to stay in a colony by being able to detect the nurse bees by their slightly different wax coating. But as a colony declines, the differences between nurse bees and foragers becomes undetectable to Varroa and so they will hop aboard foragers and find themselves in a different home, ready to wreak havoc in a once healthy colony.