A “possible” siting of an Asian Hornet near Maidstone in Kent, south east England, has been reported by the UK National Bee Unit (NBU), a government agency.

The NBU has described the reports as “credible” but following a field investigation by a local bee inspector “has not been able to verify the report”. 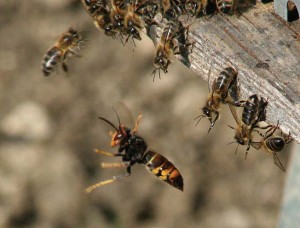 Vita first reported on the Asian Hornet, Vespa velutina nigrithorax, threat in 2010. The Asian hornet was first identified near Agen in France in 2004 and is thought to have arrived in Bordeaux from China in a consignment of pottery. By 2007 apiaries around Bordeaux were suffering up to 70% colony losses. Since then it has been spreading at a rate of about 100km each year into neighbouring countries and further north in France.

In June, we reported that it had been seen in Italy. There has been an expectation that it would reach south or south east England at some point.

Asian hornet nests are hard to spot until the leaves fall from their nesting trees in autumn.  But the damage they do is unmistakable: groups of five to 50 hornets hover in front of a hive, picking off single honeybees, decapitating them and stripping off their wings and legs before making off with the “meat ball” to their nest to feed their young. As the attacks continue, the honeybee colony stops flying and has to consume its own stores, eventually weakening it to such a point that an invasion force of many hornets enters the hive to rob it out.

There’s a very good identification sheet by the Non Native Species Secretariat on the Asian hornet downloadable here. NNSS asks for reports of suspected Asian hornet sightings to be emailed to:

Vita has been working on a trap for the Asian hornet and soon  will have had its first limited production run for France where the Asian Hornet problem is at its most acute.