A tale of two colonies

One (left) is healthy with empty cells only where the foundation wiring is, the other (right) has very pepper-pot like brood with some larvae looking suspiciously like foulbrood. It isn’t actually foulbrood, but the result of PMS: Parasitic Mite Syndrome. (Here’s a really good comprehensive look at PMS.) It’s Varroa doing its worst! the one on the left has Varroa too, but is managing much better.

One big difference: the colony on the left was swarm managed back in May and now has a new queen. The one on the right has had the same queen all season and therefore hasn’t had a brood break that might help curb the growth of the Varroa mite population.

Both are now being treated with Apiguard. The one on the right is expected to recover even from its very poorly state which only became evident after the summer flow finished. 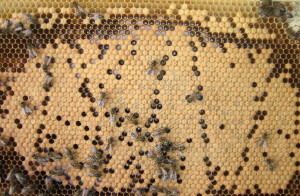 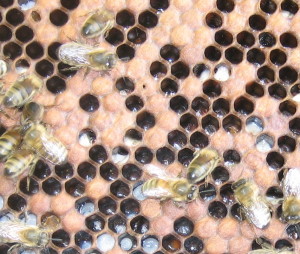