A surprise at the herb farm 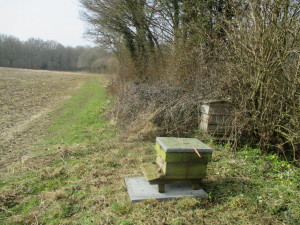 Last weekend, my first hive was moved to the herb farm I blogged about last November, but there was a surprise in store.

The abandoned WBC hive in the undergrowth that appeared to be empty last autumn did in fact contain a colony of bees. Oh dear! That will have to be dealt with.

I have never really wanted to manage a WBC. It’s a traditional British hive type invented by William Broughton Carr in the late nineteenth century. It is loved by many, mostly for its pretty looks, but disparaged by others! Don’t even mention a WBC to a beefarmer!

I am told that the WBC was especially useful in the days of nineteenth century austerity because the inner walls could be made from discarded fruit boxes. That would have been very thin, cheap wood which would have been protected by the outer ‘lifts’ made of sturdier, more weather-proof wood. Bee-tightness of the joints was obviously not then a priority. WBCs could keep bees warm in winter, not too hot in summer and condensation was not likely to form within the hive. 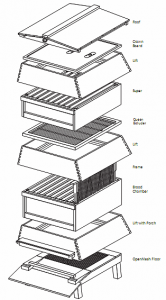 The architecture of a WBC hive, courtesy Maisemore Apiaries www.bees-online.co.uk

WBCs certainly look pretty, but they pose management challenges. And I found out very quickly what one of those challenges might be. The abandoned hive at the herb farm was very difficult to prize apart because the colony had obviously done well last season and had built brace comb everywhere — including between the inner and outer walls. It was a bit like cavity wall insulation, just a tad stickier. Still, the honey looked a very tasty dark-golden colour and that promises well for the apiary.

Since I don’t have the parts to manage a WBC and I certainly don’t want a colony untreated for varroa in the vicinity, something must be done! At a first quick inspection, there was sealed, seemingly  healthy brood, but no obvious unsealed larvae and, in the chaos of the sprawling nest, no sign of the queen. Given the cool day, I quickly tried to tidy up, cut out the mountains of brace comb and re-organise the frames so that a more thorough inspection could happen on a better day.

The emerging plan is to inspect the colony thoroughly to ensure that it is healthy, treat for varroa and possibly transfer it to one of my Langstroth hives or offer it to a WBC hive beekeeper.  More later …

UPDATE 16 March: We shook-swarmed the bees in the WBC into a Langstroth hive and provided some feed. It was too cold to search for the queen thoroughly, so we hope she is on board. Two Apistan strips were also inserted as an anti-Varroa treatment. Since there is no brood yet, the strips need not stay in for the usual full six weeks of two brood cycles. The colony seems healthy but quite small, so we can only hope they get can get going in the spring nectar flow.