A beekeeper and now a waspkeeper 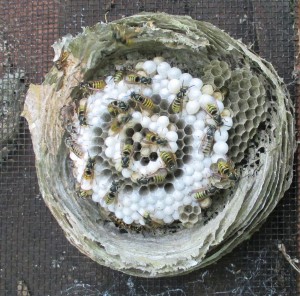 Lifting the last empty super from a stack to put on a hive, I came across this wasp nest built on a varroa screen that was to stop wasps and bees entering the super stack. I inadvertently ripped the nest exposing this cross-section — a beautiful sight.

The larvae that were exposed were wriggling in an extraordinary manner. The wasps seemed just a little perturbed.

Now this part may shock some beekeepers: I tried to reinstate the nest. I quite like wasps and have been lucky enough that they have never troubled my bees.

But of course if they were Asian hornets (Vespa velutina nigrithorax) rather than the common wasp (Vespula vulgaris) , I’d be taking a rather different line! 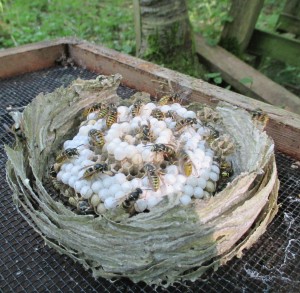