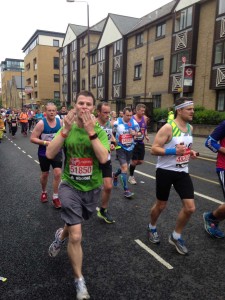 Sebastian blows kisses to his children supporting him at the roadside.

Sebastian Owen, Vita’s Commercial Development Manager, ran a personal best in the London marathon yesterday and in the process raised sufficient funds for three water tanks in Uganda. It was no stroll in a Royal Park though!

Along a route passing many of the great sights of London and urged on by enthusiastic crowds, Sebastian managed to run every stride of the way. That in itself was one of his main targets for the day — to achieve a Personal Best time on top of that made it very special.

“The crowds along the way were superb. Going across Tower Bridge, I think the noise they made caused everyone to increase their speed. And towards the finish line, they were definitely a huge boost as I was flagging, but still determined to run every step of the way without a single walking stride!”

Along the way, Sebastian passed the broadcaster Chris Evans, a chap carrying (and struggling!) with a 36 kg backpack and three extraordinary runners masquerading as the boat out of Toy Story.”

Sebastian has been training for the marathon for almost a year and a few months ago discovered that he was one of the  lucky 30,000 to win a place by charity ballot to run in the London Marathon.

Three men in a boat

Starting off with a fundraising target of £2,000, Sebastian raised a total of £4500 — enough for three water tanks in Uganda to be installed through Mityana a charity based near Vita’s offices in the UK.

It’s not to late to donate and respect Sebastian’s achievement.

You can donate here.